After five long months it seems that the only economic strategy the Queensland LNP government has is slashing public sector jobs. I have read in some articles that the figure may be 20,000 – 25,000 a huge blow to the economy of Queensland.

There seems to be an absence of economic stimulus projects of any kind in any of the four industries that the LNP mentioned pre-election. If something radical is not announced in the September 11th budget Queensland will remain on auto-pilot, continuing to see unemployment rise.

Even the man who donated so much money to the LNP cause in order to see them in government, Clive Palmer, has been sidelined by the incumbent LNP government. There seems to be no gratitude towards Mr. Palmer, a stance that could well come back to bite them in future.

LNP members have had to apologize for stating the States debt as $100B when in fact the debt is closer to $50B. Every Qld public servant feels as though they are in a state of siege as this government tinkers with these 20-25,000 families lives, it is a shocking state of affairs that even hardened LNP voters are complaining about. Imagine an Abbott/Newman wrecking ball on the Australian economy.

the trouble with bald headed national party clowns is….

town clerk treachery…keeping his mates in employment at our expense. 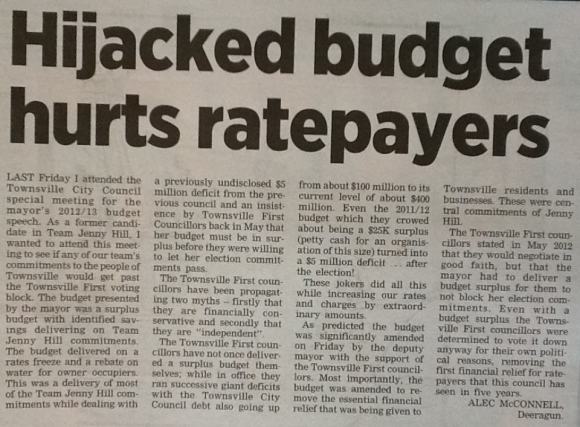 Letter to the editor about Townsville City Council budget by Alec McConnell, former candidate for Division 2

Hijacked budget hurts ratepayers
Townsville Bulletin 16 August 2012
On Friday I attended the Townsville City Council special meeting for the Mayor’s 2012/13 budget speech. As a former candidate in Team Jenny Hill, I wanted to attend this meeting to see if any of our team’s commitments to the people of Townsville would get past the Townsville First voting block.  The budget presented by the Mayor was a surplus budget with identified savings delivering on Team Jenny Hill commitments.  The budget delivered on a rates freeze and a rebate on water for owner occupiers.
This was a delivery of most of the Team Jenny Hill commitments while dealing with a previously undisclosed $5million Deficit from the previous Council and an insistence by Townsville First Councillors back in May that her budget must be in surplus before they were willing to let her election commitments pass.

The Townsville First Councillors have not once delivered a surplus budget themselves; while in office they ran successive giant deficits with the Townsville City Council debt also going up from about $100 million to its current level of about $400 million. Even the 2011/12 budget which they crowed about being a $25K surplus (petty cash for an organisation of this size) turned into a $5 million deficit… after the election!

These jokers did all this while increasing our rates and charges by extraordinary amounts.

As predicted the budget was significantly amended on Friday by the Deputy Mayor with the support of the Townsville First Councillors.

Most importantly the budget was amended to remove the essential financial relief that was being given to Townsville residents and businesses. These were central commitments of Jenny Hill.

The Townsville First Councillors stated in May 2012 that they would negotiate in good faith, but that the Mayor had to deliver a budget surplus for them to not block her election commitments.

Even with a budget surplus the Townsville First Councillors were determined to vote it down anyway for their own political reasons, removing the first financial relief for ratepayers that this Council has seen in five years.

One wonders whether or not history will repeat? It was pointed out on ABC Insiders this morning that in 1992 Dr. Hewson was looking the goods for an election win for the LNP when suddenly Jeff Kennett became Victorian Premier and upon taking office declared war on the public service and proceeded to slash and burn services that Victorians depended upon.

Fast forward 20 years to 2012 Tony Abbott is looking as though he is cruising to become Australia’s next Prime Minister, suddenly Campbell Newman becomes Queensland Premier….

Time has passed since the price was put on carbon in Australia, it was reported from the Liberal & National Party/s that we would see catastrophic things happen in our economy because of it http://www.thecourier.com.au/story/176276/figures-show-inflation-effect-of-carbon-tax-mostly-hot-air/?cs=7 unimaginable price increases would flow the Sunday roast would cost $100 and so on, with Tony Abbott having run around this nation for nigh on two years talking about other politicians being liars, one wonders how this man sleeps at night.

All his arguments actually fall on even rudimentary analysis, the carbon tax was supposed to be the death of the coal industry, this also has not occurred. It is abundantly clear now that Mr. Abbott was only trying to protect his billionaire mates in the mining industry, whose product when burned to produce electricity creates greenhouse gases which in turn pollute our atmosphere.

The Gillard government has done quite a lot for pensioners and low income families, if we showed faith in the government schemes that were available to install renewable energy, for those who showed initiative took green loans and paid them off, our cost of living has been much reduced, and the schemes were available to all who believed in them.

At the time of the next election, late next year, time will be against us to meet our bipartisan commitment to reduce emissions by 2020 without a price on carbon. By then planting a few trees as is the Opposition Leaders way, will be nowhere near the effect required by the allotted date. It is very sad to see an Opposition so devoid of policy in so many areas as is the current federal Opposition, in fact the only policy we know of is a return to WorkChoices, a wage lowering anti-worker Industrial Relations system, which was tried in the past and proved to be a hindrance rather than a help to productivity and stop the boats.

Perhaps a new political party is required, a party that has low to medium income families at heart, and who advocates on their behalf, much as the ALP used to do 4 to 5 decades ago, before they became dominated by right wing unions such as the AWU &SDA.

Conservative politicians and their leaders have for centuries declared war, not just on other countries, but on their own people.

Hitler, for example, declared war against his own people and on the world.

George W. Bush was an enthusiastic supporter of capital punishment and failed to look after returned service people and Hurricane Katrina victims. He declared a so-called "war on terror" which went on to kill hundreds of thousands of innocent people.

Here in Queensland we have a Premier who has declared war on public servants, women, the poor and everyone else.

The conservatives, it appears, do not know how to create an income to service the people (the public servants) who deliver services to the poor and people generally. Conservatives do not seem to understand innovation and are not willing to take steps other than sacking people and destroying their livelihoods on a wrong-headed drive to save money.

It is the old, the infirm, the disabled, the sick and the young in the community who will suffer the most from Newman’s cuts.

This conservative ideology delivers the type of economy that the USA currently has. It’s not a pretty picture – trillions of dollars in debt, high unemployment. Do we seriously want that for Queensland?

The message to all Queenslanders about Campbell Newman is: "Be afraid! Be very afraid!"

Campbell Newman: Give us an NDIS

We’re on the verge of something big: a nationwide insurance scheme to ensure that if you or your family member ever has to live with a disability, you won’t simply be left to fend for yourself. It’s a reform on the scale of Medicare that will save thousands of families from financial ruin.

Last week, NSW Premier Barry O’Farrell and Victorian Premier Ted Baillieu heard from thousands of GetUp members, asking them to stop their bickering over funding and agree to help fund a trial of a National Disability Insurance Scheme. On Friday, they both agreed, joining other states around the country. Yet Queensland’s own Premier Campbell Newman is still refusing to step up.

Queensland currently spends less on people with disabilities than any other state in the country. Premier Newman says our state can’t afford it, but that’s just not true. Productivity Commission research finds that "far from imposing a cost, the NDIS will actually make Australia richer" – adding an estimated $32 billion to our nation’s GDP by 2050 through increased workforce participation1.

On top of that, Campbell Newman recently had no problem finding $80 million in taxpayers’ money to help the racing industry, but he can’t find $20 million in the budget to fund a scheme that will improve the lives of millions of Queenslanders living with a disability. This is really about priorities.

Campbell Newman might not want to listen to Julia Gillard or other Labor Premiers, but there’s a group he will listen to: his own backbenchers. Send a message to your local state MP that will get the party room talking: don’t let Queensland get left behind.

Disability support in Australia is currently described as a lottery. In some states, if you acquire a disability through a car accident for instance, you get help to cover the ongoing costs of your care. In others, if you’re born with a disability or acquire one through injury, you receive absolutely no support whatsoever – no matter how much your costs skyrocket.

We spoke to a GetUp member in NSW whose daughter has cerebral palsy. She’s a mother of three, and her family have acquired more than $300,000 in debts to pay for wheelchairs, regular speech therapy and other essentials her child needs to live a full life. Her story is typical of many struggling to cope across the nation, demonstrating the human and financial cost of a system that leaves people to fend for themselves.

We can do so much better than this. It’s time to look out for each other, and make sure no one goes bankrupt because their child was born with a disability. Write to your MP today, and change the conversation tomorrow:

Thanks for making your voice heard,
The GetUp Team

PS – Many inspiring people have been working on this for years. Learn more about the need for an NDIS and sign up as a supporter at: http://everyaustraliancounts.com.au/